Recently in an NBC Nightly News interview, Jerry Seinfeld told Brian Williams, “I think, on a very drawn-out scale, I think I’m on the spectrum.” The Spectrum Seinfeld is talking about is the Autism Spectrum. 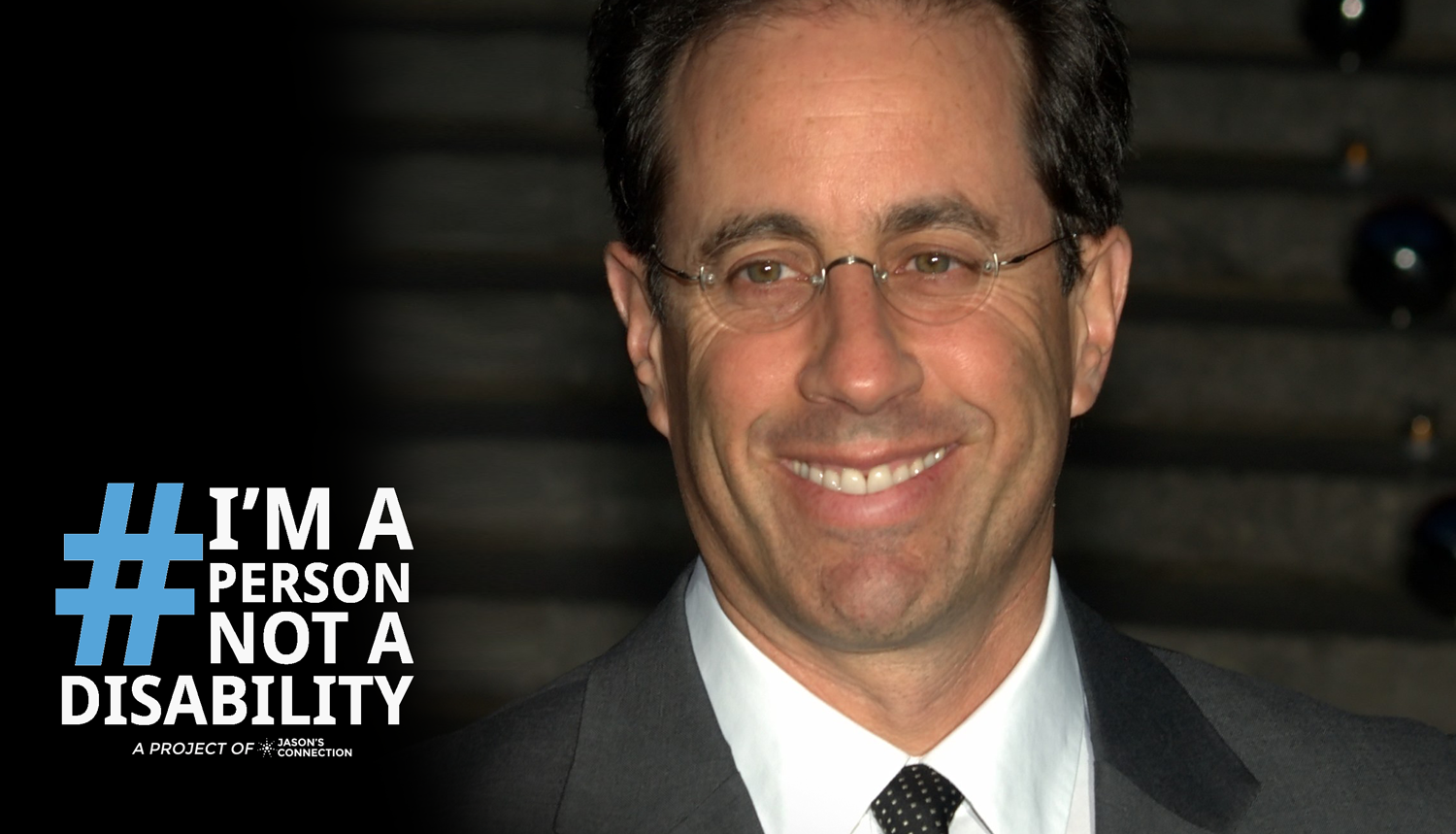 The feedback to Jerry Seinfeld’s revelation has been at its best, mixed. There are plenty of strong, positive reactions. But there are many highly negative and sometimes even absurd retorts.  The following is my own commentary, looking at those claims. I want to illustrate to you why what Jerry Seinfeld said and the way people are reacting to it shows that we have to change the way we talk about Autism Spectrum Disorder (ASD). The way we talk about developmental and intellectual disabilities.

The way we talk about those different than the quote/unquote norm.

Let’s first say that I do understand some of the perspective of the parents of people with severe autism. First off, a self-diagnosis is not sufficient enough to declare yourself on the spectrum. I caution Jerry Seinfeld to not self-diagnose.  We do not know for sure if his claim was a self-diagnosis, just a statement or if he has some kind of medical backing.  While we cannot confirm that Seinfeld has ASD, we do know of other very high functioning people on the spectrum.

One complaint is that Seinfeld takes away from the serious nature of being autistic. This could cost funding for awareness and research.  In the Washington Post, an article mentioned,

“The funnyman diminished the seriousness of their struggle. At stake, they say: public perception, which influences taxpayer dollars to fund research, education and regional health-care services.”

This is an important point because while Seinfeld coming out has some positive points, we do not want to overshadow that autism is a serious condition that affects the parents and the people themselves in tremendous ways.

Funding and research are still very much needed. Having any child, especially with special needs, can be very costly. Sure, those on the severe end of the spectrum need a bit more help and support. But accommodations should be extended to everyone on the spectrum as needed. We all have ongoing struggles.

It is the management of our struggles that impact us. With the right support, strategies, and tactics, these issues can become less overwhelming.

Others have suggested taking away the Autism Spectrum Disorder label as a whole and putting it on separate diagnosis.  I agree – but without necessarily taking away from the overall diagnosis of ASD. Those advocating for separate diagnoses are writers such as Marie Myung-Ok Lee. Lee writes for Salon.com and has a child with severe autism. She notes we need to separate the Spectrum “so that we can focus on the urgent looming issue at hand.”  She means that we need to focus on only the most severe people on the spectrum and no one else.

This I disagree with. Not because we shouldn’t focus on severe autism, but because that is the type of autism that generally dominates conversations, accommodations and so forth. While it is important these more severe are known, it is just as important that all diverse needs on the spectrum are known. ASD is not just one specific type or group.

"Jerry Seinfeld coming out needs to change the way we talk about disabilities because the conversation fails to look at individuals for their accomplishments, for their work, and who they are."

In addition to the criticism Seinfeld has received, there has been plenty of support. Advocacy groups like Autism Speaks, the founder of the Autism Self Advocacy Network Ari Ne’eman, and author John Elder Roberson have come out in support for Seinfeld’s statements. They believe it takes away some of the stigma that is associated with Autism.  This is actually a really relevant point.

Autism Spectrum Disorder is mainly associated with the struggles people have. It can also have a huge focus on people on the more severe end. It’s easy to forget about others across the spectrum who have been able to learn the skills needed or whose disability is more hidden or invisible.

ASD is mainly associated with the struggles people have. But the focus is squarely on those with more severe forms of Autism. Society forgets there is a range of those with autism. Seinfeld shows that those with Autism can learn the right skills and almost never seem autistic. That people with ASD should not be boxed into an expectation. Having ASD is part of who we are – but it does not define us. Our actions should define us and we should be afforded the same expectations of those without ASD.

ASD does come with challenges that need to be overcome. Even high-functioning self-advocates are not denying that. But I do believe they would note they have had some similar challenges to those with more severe forms of ASD.

For instance, I have been able to talk since I was about 3. Just because I could talk doesn’t mean anyone would listen or believe I knew enough to be able to tell people what was going on.  I was bullied ruthlessly for being different even at a school for all people on the spectrum. I am sure if you ask John Elder Roberson, Ari Ne’eman, Temple Grandin, David Finch, or even Jesse Saperstein they can relate to the hardships of that can come on the spectrum.

With those hardships, though, it is possible to work out strategies that help you be more successful and even use some of the traits of autism in a more positive way. For example, Jesse Saperstein has talked about how his determination and resilience helps him get work done.  As well the over thinking that can make it hard to function, if used right, can be used to form great ideas. As well my lack of understanding of social skills has made me very interested in understanding, and makes me work harder to make eye contact and understand social situations.

The stigma that surrounds autism generally focuses on the negative traits. There is little talk about how these traits can effectively be worked on with the right supports. Many people on the higher functioning end of ASD, do not need as much support and choose to not open up about their ASD because of the stigma. They don’t ask for the little help they need, because of the stigma. 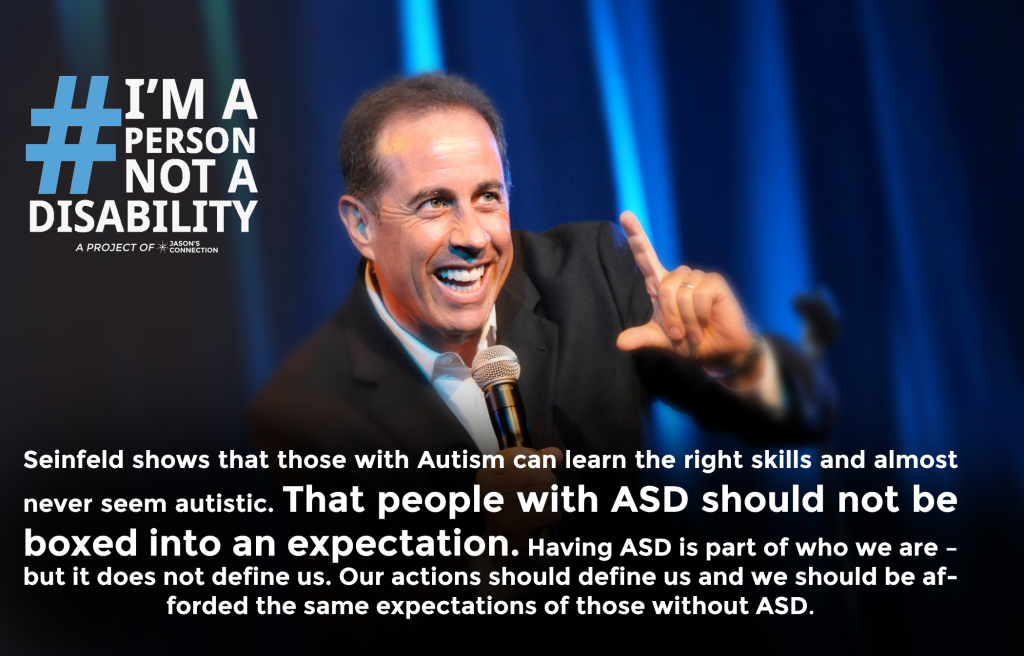 John Elder Roberson brings up this interesting point, “Mr. Seinfeld’s speculation that he ‘may be on the spectrum,’ may be the first step in an actual diagnosis or evaluation, and it may be a milestone of his journey of self-discovery. Many people are critical of self -diagnosis, but the fact is, most adult diagnoses start by people asking themselves, ‘might I be autistic?’ Seldom are adults handed this diagnosis out of the blue. “

This is a legitimate point.  Even the way Seinfeld came out shows in some way he is trying to distance himself from the negative stereotypes. He purposely indicates that he would be on the very, very far end of the spectrum when he says “a very drawn out scale.”

This can make it tough for people on the high end of the spectrum to come out. We want to avoid the looks, the “understanding” stares, that “talked down to” voice, the pre-conceived notions for every action, the assumed expectations, and the general disbelief that we are not as equal as everyone else.  Sure, we share different traits with different people with ASD. We are individuals – not the disability itself. Too often autism characterizations are driven by what people can’t do and do not always take into account people on the higher end.

Jerry Seinfeld coming out needs to change the way we talk about disabilities because the conversation fails to look at individuals for their accomplishments, for their work, and who they are. Instead of focusing on Seinfeld, we focused on the Autism Spectrum. Instead of asking how Seinfeld for learned to work with his own challenges and turned them into strengths, we just talked about Autism Spectrum Disorder and its role in society.

By focusing on the new strengths that people with ASD discover and use, we will have more people seeking the support and accommodations they need to be successful. We need to stop seeing someone with a disability as having such a terrible life. This new outlook can result in significant funding for all of those on the Spectrum. Having people who can articulate their experiences without fear of a new found stigma, helps those who may not be able to have a voice themselves. Talking about strategies helps others learn to overcome difficulties and together, we will build a stronger disability community.