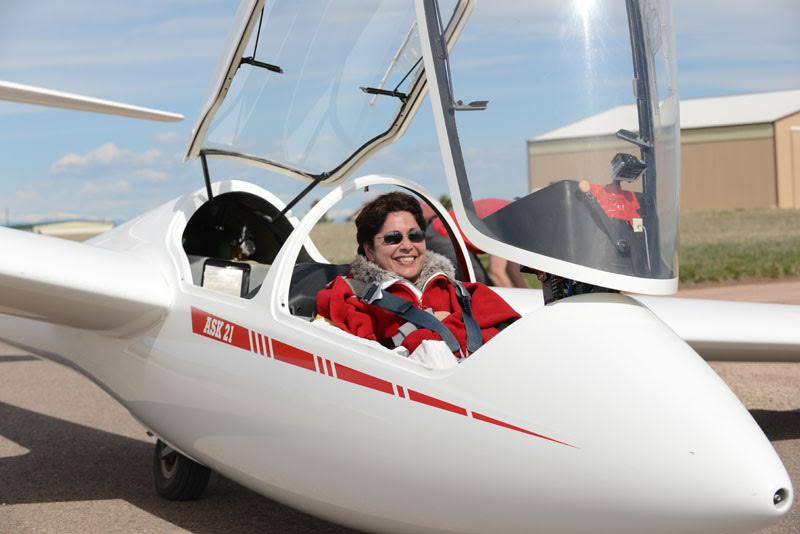 "Argue for your limitations and sure enough they're yours." Richard Bach

For my birthdays I like an adrenaline rush to remind me that I am alive. Not every birthday has been celebrated this way but there are some very memorable, May 1st – May Days in my life. For my 52nd birthday I took a glider plane ride.

that I am alive.

I'm not hiding nor am I embarrassed by my age particularly when put in context that I was not anticipated to ever see my 35th year after June 22, 1997. My age is a badge of honor of avoiding the Grim Reaper on at least three occasions in the past 20 years.

This adventure took place at a small, private airport in Franktown, Colorado, less than 30 minutes from my home in Black Forest. There was no TSA, there was no "FEMALE ASSIST" followed by a patdown, and there was no need for Valium. There were two pilots and two planes; a pull plane and a glider plane.

Using a body sling and two strong men, I was easily hoisted from my chair and lowered into my designated seat.

It was a bit awkward getting me into the front cockpit of the glider plane but not an impossibility. Using a body sling and two strong men, I was easily hoisted from my chair and lowered into my designated seat. Once harnessed into this compartment, there was no extra space providing any opportunity for movement, even for an able-bodied passenger. All occupants were equally constrained regardless of physical abilities.

The pilot of the glider plane took his position behind me, out of my sight. I was by myself in the front of the plane. The tow plane headed down the runway and the slack in the tow rope diminished until it was taunt and the glider plane started to move forward. Following the tow plane it ascended 500 feet... 1000 feet... 1500 feet and then the rope was disconnected and the tow plane returned to land. In that moment sound stopped.

It was not a deafening silence, it was more like a meditation peace. This stillness, this silence put my mind to rest, away from today's to do list and focus on the moment of soaring. I could look to the east and see what must have been beyond the Kansas border. The plains were flat without any distinguishing features. A small pivot of my head and I was now looking to the west where the monotony of the flat plains was abruptly interrupted by the the intrusion of the Rocky Mountains. And there was Pikes Peak jetting up 14,110 feet and still with snow at the top.

Right as I was feeling more comfortable in surveying the scenery that laid below me, the pilot reminded me of my mission – an adrenaline rush. The nose of the plane was turned straight down. I could no longer see the Kansas prairies or the Rocky Mountains. All I could see was the quickly approaching ground now in front of me. The five point harness firmly held me in my seat otherwise I would have fallen forward and tumbled out like a rag doll.

The pilot correctly read my body language and turned the the plane into another nosedive.

Within seconds, which seemed like minutes, the nose of the plane was snapped 180° and now my only view was the infinite sky above. That snap of the plane pulled 2G's. I'm not sure if my smile was due to the thrill or my 52-year-old face getting a temporary facelift from gravity pulling back the excess skin. Regardless, the pilot correctly read my body language and turned the the plane into another nosedive. This took place three times and I was ready for more except that we ran out of airspace, an important factor when flying.

On the ground I was once again subject to gravity, now with a smile paralyzed on my face...

Before I knew it 40 minutes had passed and I was safely on the ground and again subject to gravity and my paralyzed body. My smile became paralyzed on my face for the remainder of my birthday.

What are you doing for your next birthday?