While humans, as a species, are pretty smart, it is impossible for us to claim the title of “most intelligent” species. Whales’ brains are proportionately larger than human brains. Whales, like humans, also have spindle neurons which are specialized brain cells that are involved in the processing of emotions and help interact socially with other mammals.

On my bucket list was a trip to Hawaii with three non-negotiable adventures; the Waimea on Kauai (the Grand Canyon of the Pacific), traveling the road to Hana (and beyond), and whale watching. The trip was planned for March when whale migration is active.

“If you are not willing to risk the unusual, you will have to settle for the ordinary.”   Jim Rohn

While in Maui, Bill and I had made arrangements on a large whale excursion tour boat only to learn that because I am in a wheelchair, I would be locked down in one position - not permitted to move regardless of the whales' movements. He knew that this restricted viewing would not be acceptable on my must-see list and made alternative arrangements with a small fishing boat to take us on a 4-hour tour in hopes of sighting a majestic mammal.

Mothers and their newborns annually travel south from Alaska to the Pacific Ocean in packs of three. The third whale is a teenage male who is too young to breed and one generation beyond being a baby. He is referred to as an escort.

I was lifted onto the stern of the boat in my wheelchair, and able to move from port to starboard with ease. We traveled offshore to a nearby bay, a location frequented by large whale touring ships and turned off the engine, floating peacefully, alone.

What happened next was amazing.

A pack of three whales found us or should I say, found me. First the mother came within 10 feet of the stern of the boat and literally checked me out, eye to eye. Apparently our introduction went well as she then allowed her baby to join her in our meet and greet. Mother and baby, side-by-side, emerged from the water and just floated, staring at me. The teenage male “escort” kept a vigil watch over our interaction. He remained partially submerged, on the side of the boat, less than 5 feet away. And when he did submerge, you could hear him "sing" to the other members of his group.

An escort hunchback whale which averages between 45 and 50 feet in length and 80,000 pounds parked next to the boat, dwarfing our fishing vessel. Describing this gargantuan creature by size does it no justice when it is sitting 10 feet away. He is 50 feet long and weighs close to 80,000 pounds. There is nothing living on this planet that is larger. Bill took an unexpected spill into the water and actually was able to reach out and touch the gentle giant.

This interaction was interrupted when the mother decided it was time to train her offspring some basic whale maneuvers-breaching. This is when a whale performs aerobatics by jumping out of the water and slapping their fin against the water. It can be performed as a form of communication, to clean parasites off of their body or purely recreational. This demonstration took place 30 feet from our motionless boat, and lasted for hours. They then traveled back to the stern of the boat for more interaction with me. 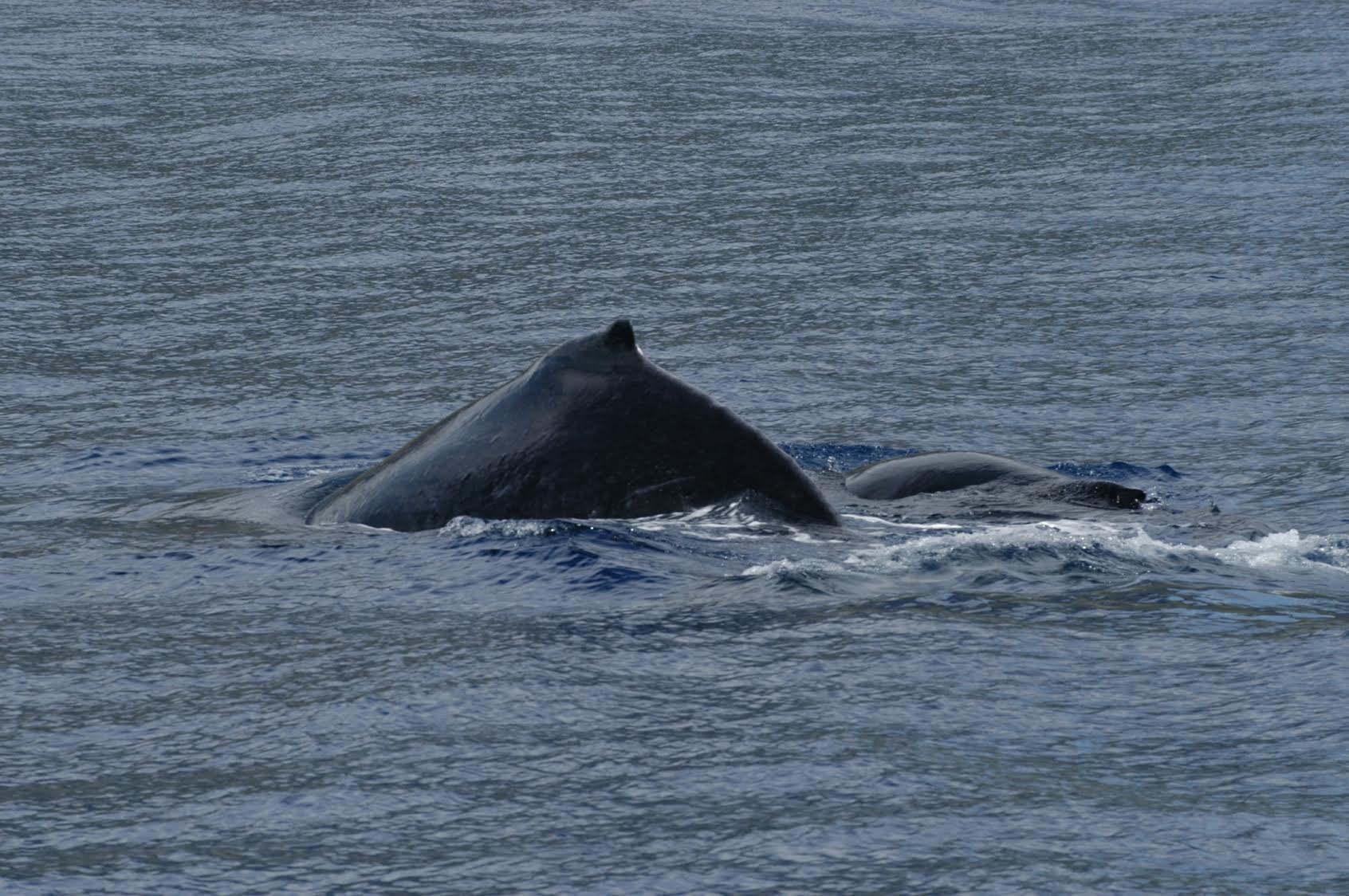 The captain declared that our 4-hour tour would be extended indefinitely without charge. He had never experienced or heard of such an encounter with whales. Finally, after 6 hours our private audience with the three hunchback whales came to an end but not without a proper goodbye. The mother rolled on her back and waved goodbye as they swam out to sea.  Not just once, this departure lasted well over 30 minutes with dozens of waves.

This spectacular adventure could not have ended more appropriately with the appearance of a rainbow as we returned to shore.