The Inspirational Story of an Uncomplicated Life: A Conversation with Paul Daugherty and Jillian Daugherty Mavriplis

Recently Jason’s Connection’s Founder, Jason Harris, spoke with writer Paul Daugherty, and his daughter, Jillian Daugherty Mavriplis, about their relationship, their lives, and the book, An Uncomplicated Life: A Father’s Memoir of His Exceptional Daughter.

AN UNCOMPLICATED LIFE is a father’s exhilarating and inspiring love letter to his daughter with Down syndrome, whose vibrant and infectious approach can teach us all how to live a little better. “Jillian was born October 17, 1989. It was the last bad day.” Jillian Daugherty was born with Down syndrome. The day her parents, Paul and Kerry, brought her home from the hospital, they were flooded with worry and uncertainty, but also with overwhelming love, which they channeled to “the job of building the better Jillian.” They knew their daughter had special needs, but they refused to have her grow up needy. They were resolved that Jillian’s potential would not be limited by preconceptions of who she was or what she could be. 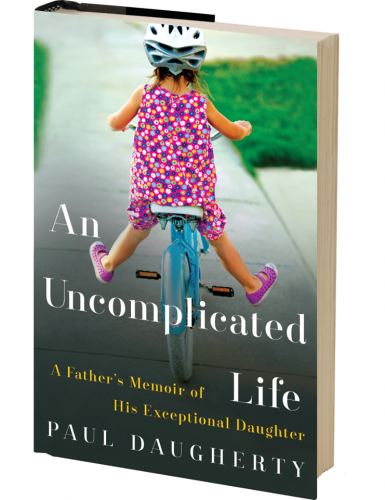 PAUL DAUGHERTY has been an Enquirer sports columnist since 1994 and has been chronicling Cincinnati sports since 1988. He has covered almost every major sporting event in America, as well as five Summer Olympics. Along the way, he has been named one of the country’s top-5 sports columnists four times, and Ohio columnist of the year on seven different occasions.

JILLIAN DAUGHERTY MAVRIPLIS works as a manager for the men’s basketball team at NKU, and got married this summer to Ryan Mavriplis.

Paul and Jillian will be appearing at Books by the Banks this Saturday, October 17th.

For more information on Paul, Jillian, and the book, please visit: http://www.uncomplicated.life/ and https://pauldaughertyuncomplicatedlife.wordpress.com/2015/09/23/speaking-engagements/