At the 2014 Findley Market Opening Day Parade, one would have to look carefully to see that Dave Concepcion was there.

Given the cheers of “Teddy! Teddy! Teddy!” one would think that no one else was in the parade except the Cincinnati Reds’#1 fan, Teddy Kremer.  It was just a few years before, with the final bid on a live auction item, at Mercy Montessori’s fundraiser–Teddy’s former school–that his fantastic odyssey began.

IT WAS THE PERFECT STORM: Teddy, a committed Cincinnati Reds fan, a bat-boy position for a game, and a personality that won over Reds players, managers and fans alike.  Passion met opportunity and eventually the Reds organization harnessed that passion by offering Teddy a position in their “Fan Appreciation” department.   Who better for that job, than their #1 fan.

Teddy’s story has gone from print to the big screen in the documentary short, “Teddy Ballgame,” produced by Megan Anderson of ESPN. On Monday, May 12th, beginning at 6:00pm, the REELABILITIES FILM FESTIVAL: CINCINNATI brings “Teddy Ballgame” to Taylor High School in Cleves.  Please join Teddy and some local VIPs for a special presentation of his documentary, along with two other ESPN:60 documentary shorts that address disability and sports.

Given the cheers of “Teddy! Teddy! Teddy!” one would think that no one else was in the parade except the Cincinnati Reds’#1 fan, Teddy Kremer. 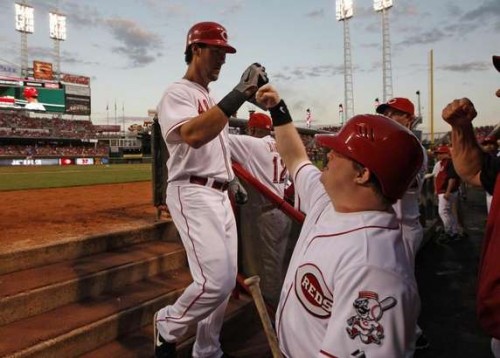