Join the The Jewish Family Service in Houston, TX this weekend for the kickoff of the ReelAbilities Houston Disabilities Film Festival 2014. ReelAbilities is the largest film festival in the nation committed to promoting appreciation and awareness of the lives, stories and artistic expressions of people with various disabilities.

Opening night for ReelAbilities: Houston Disabilities Film Festival 2014 will be at The Houston Zoo. Reception starts at 5:30pm with a screening of The Importance of Tying Your Own Shoes beginning at 6:30pm. Purchase tickets to go to opening night! 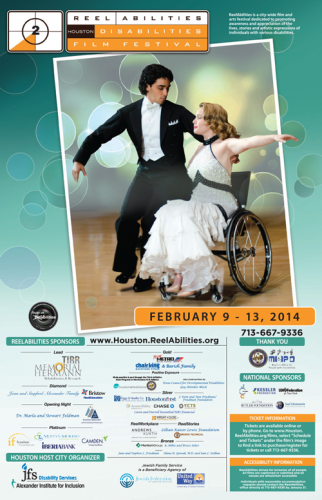 ReelAbilities doesn’t just stop there. There is an entire week filled with great films at different venues all over Houston. Films include Aphasia, Musical Chairs, and a free screening of How to Train Your Dragon Sunday afternoon! Check out the brochure or ReelAbilities Houston website for full details on screenings and venues.

This is the second year Houston has taken part in the ReelAbilities film festival.  The festival will present award winning films by and about people with disabilities in multiple locations throughout the city. Post-screening discussions and other engaging programs will bring together our community to explore, discuss, embrace, and celebrate the diversity of our shared human experience. The Institute for Rehabilitation and Research (TIRR Memorial Hermann) will serve as the lead sponsor of this new cultural event in Houston’s arts and human services arena.

Want more? Check out this preview of the upcoming week of festivities or like the ReelAbilities Houston Facebook Page. It’s certainly not something to miss!