Out Of Darkness: Pieces From a PTSD Victim 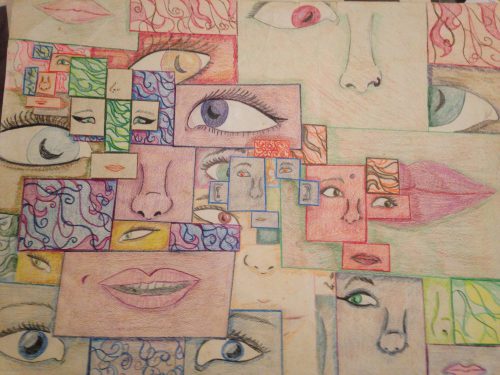 I don’t have the nightmares much anymore. At least I don’t think I do. I just don’t remember my dreams.

I remember as a child the nightmares were brutal and strange. There was a lot of falling and falling through things. There was never anyone to help. No adults to save me. It was always just me and the monsters.

The weirdest part was that the monsters didn’t always look like monsters, sometimes they were people, or even saints. They would stare at me and chase me away from any perceived source of help. That was probably the most frightening part, being isolated, even in my dreams.

Is your world as dark as mine?

Or is it of a different kind?

Birds and bees and wonderous things

Unlike the sorrow this place brings

Into my timid little breast

And that pump beating in my chest.

I’m tired. It goes clear past the bones and into the soul. I’m tired into the core of my being.

I can smile and do things but I just want to sleep forever, or at least until my soul feels revived. Sometimes I almost feel alive. Sometimes I believe I’ll be ok, but then something will happen and it’s back. I’m tired, I’m afraid, I’m small and unimportant.

I feel like I am dying. I’m so stressed my chest, head, and stomach hurt. I’m dizzy and disoriented, lying on the couch. I look at my scissors and think that stabbing myself would hurt less.

Maybe I need to relearn how to do things? Maybe I just do everything wrong?

Sometimes I think how wonderful it would be to start over, have the type of childhood I should have had. With security and acceptance. How would I have been? Not like I am now. Not laying on the couch doing deep breathing exercises to try to stop the pain. Not confused, dizzy, disoriented, and useless.

I don’t talk to people much.I don’t know what to talk about. It seems there’s not much that interests me much anymore, or people don’t really want to hear what I have to say. I guess mental illness is uncomfortable for people to hear about. It’s easier to hate or blame. It’s easier to pretend it’s not there if they don’t have to live with it.

I live with it. Every single day. I deal with the exhausting and strange thoughts. The constant feelings that everyone I meet wants to hurt me. The feeling that even fully clothed, I’m completely naked everywhere I go.

People are always asking my husband, why can’t I get a job and help him pay the bills? I wish it were that easy. It gets depressing to hear him explain to people that I have non-military complex posttraumatic stress disorder and have difficulty functioning on my own in public. Most times, without someone I trust, I get dizzy nauseous and often get diarrhea. The insomnia makes functioning difficult, too. My misunderstood heightened startle reflex can also be extremely problematic. People think that jumping out and frightening people like me is funny. I get it, but at the wrong time I can react badly. I’ve hit people in the past. I hate reacting violently.

Even attempting to get disability on my own is painfully difficult, Going to the doctors that I don’t know and talking to strangers on the phone. Don’t get me wrong I consciously know that they won’t hurt me but experience always whispers “what if?”.

Despite everything I’m actually fairly happy in my life. This most certainly is not some pity party. I’m surrounded by love from my husband of 13 years, our son, and Our three cats. I’m blessed in ways that “normal” people would never understand. I’ve learned to value the little things. People who actually want to spend time around me, despite my oddity, is a treasure beyond measure. Our home where we can get away from the weather, food in our bellies. It’s hard to be completely displeased with life while we have these things.