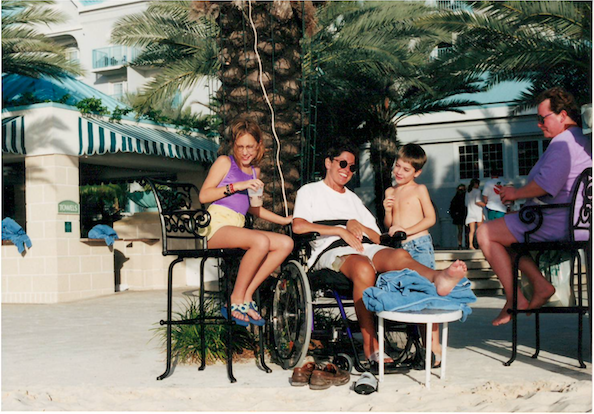 The life of Nancy Blose is divided into two segments; before accident and after accident.

Before June 22, 1997 I was a participant in the rat race. Employed full-time as an administrative assistant to the vice president at Kelly Service's headquarters, shuttling two children between early morning daycare, school and extra curricular activities and responsible for household requirements that accompany adulthood.

My life changed in a second. Returning home from my sister's wedding, my father fell asleep while driving 75 mph. When he awoke, he overcorrected the steering, propelling my Jeep into a rollover – five times. In that moment I became paralyzed.

After three months in the hospital and surviving multiple medical complications and surgeries, I was discharged as a quadriplegic only able to shrug my shoulders. Making a promise to myself that if I lived, regardless of the loss of my physical being, I would live each day with purpose and gratitude.   I choose to greet each morning as a gift with infinite possibilities.

My motivation to live was fueled by my children, Kelly and Kurt, then ages 8 and 6. They needed a mother and I refused to relinquish that position. With the support from my husband and the nursing staff, I resigned the title of patient and returned to being a mom and a wife.

I believe that with a change of attitude, an altered approach and the commitment to take action that anything is possible. I have had the privilege of attending two high school graduations, one college graduation and Kelly's wedding. My journey has taken me to living in the Caribbean, rafting the Arkansas River, skiing the Rocky Mountains and bonding with whales in Maui.

There was no compelling reason to stay. Friends and family were disappointing. It is not unusual or should I say, it is usual that following a major incident or accident, that friends often become fair weathered. A divorce, loss of a family member, a catastrophic illness or accident can all end with the same result. Those that you thought would be by your side have disappeared but others, completely unexpected, appear. I called them hidden angels.

In late September, 1997 I was discharged from the University of Michigan Hospital and faced my first winter in a wheelchair. I survived by hibernating inside except for attendance at mandatory doctor appointments. The winters in Michigan start early and end late. Halloween costumes are always disguised under winter coats and it has snowed on Mother's Day. Michigan is the 3rd cloudiest state, tied with Ohio and following Alaska. Everything turns gray in the winter. The sky is gray, the snow is gray, the air is gray. I realized that I could not survive five months of gray every year trapped inside by home. Good for the bears not so good for Nancy. I concluded that if I was now required to sit then I needed to sit where I could look at beautiful scenery.

I decided to approach my new state of unemployment as early retirement. It had always been our plan to retire in the Caribbean. We were former scuba diver junkies, requiring an annual fix every January when Bill (my husband) and I would drop Kelly and Kurt off at the grandparents and head south for six day adventure underwater. We had visited Grand Cayman twice, for a total of 12 days, and this somehow made me an authority of the Island. Granted, the majority of our time was spent either underwater or at the bar, and I'm not referring to the sandbar At Stingray City.

There were ample naysayers providing 100 reasons why I shouldn't go. I did not listen to any of their negative rhetoric, and became an eight-year-old child silently chanting "I can't hear you" and shaking my head "no no no". After all, I did not know a soul on the island, I had no connection to the medical community or care providers, and there were hurricanes.

My rationale was simple. Grand Cayman had a developed infrastructure having two hospitals and over 400 banks. The bankers needed medical services, so they must exist in the bankers had children so decent schools must exist. There were ex-patriots living on the island, so it was possible. Grand Cayman is only 90 miles south of Miami, less than a 60 minute flight. As for hurricanes, I had had three close encounters with tornadoes which only came with minutes of forewarning. Hurricanes come with days notice – piece of cake! 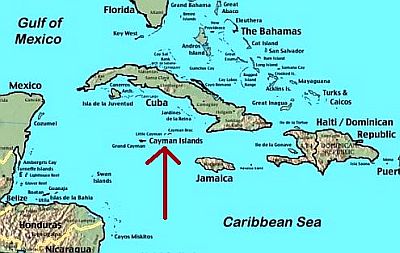 The logistics were a nightmare but I never seemed to notice, probably because this nightmare was by my own creation and motivation. Bill had been on the fence of staying in Michigan employed as an automotive engineer or joining me as early retired. Once Kelly and Kurt decided to make the move to Grand Cayman Bill too made the decision to join us. The requirements in short were:

Grand Cayman has strict immigration requirements. These include a deposit to pay for one-way tickets off the Island for the entire family, filing paperwork every six months to renew our temporary resident status and paying a fee for the privilege of living there. Believe it or not, every other country has some form of security at their borders and a way to monitor and remove those who are no longer welcomed.