51 People: Becoming friends to those with disabilities.

This great blog originally appeared on Cincibility back on June 8, 2012. Thank you to original author Tim Vogt of Starfire Council.

The other day, this article on the Huffington Post went viral, at least within my circle of friends.  Candice wrote about it as well here.  There were lots of mothers, especially, imploring people to read it.  And one friend sent it out along with the insightful and challenging question “What are you going to do about changing this reality?”

I thought it was a great question, as it acknowledged the reality of the fact that people with disabilities don’t have many friends, and then threw down that beautifully simple and sadly pathetic gauntlet:  What will you do about it?

I immediately thought of a tool that we’ve adopted to tell this story, the “51 People” research and graph (click this link for a full size version): 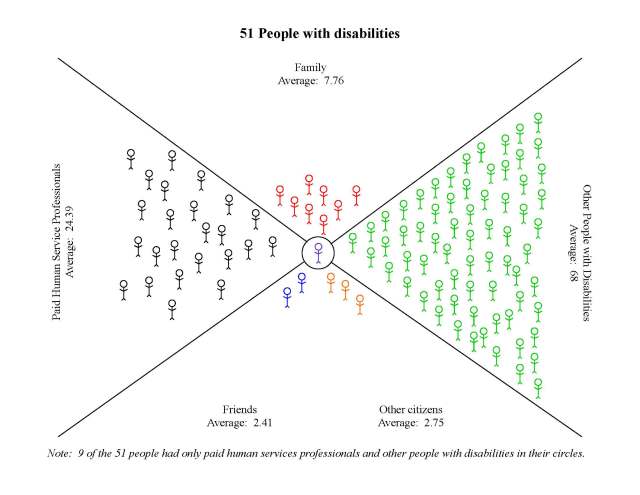 This is local research, done by Jack Pealer.  Jack has lived and worked in Ohio for a long time.  He learned about person-centered approaches and SRV in the 80′s and has been one of our most informed and thoughtful voices for inclusion ever since.  He has helped me personally a great deal in understanding what all of us are up against together in this effort.

Back in the early 90′s, Jack asked 51 people with the label of disability a simple question:  “Who is in your life?”  This is the result of that research.

To me, it prompts two more questions:

To answer the first question, let’s break the graph down, and start with “Family.” 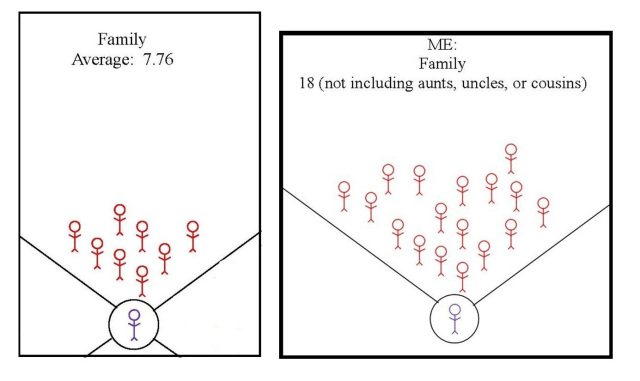 So in the research, Jack found that people had about eight family members in their lives.  That seems about right to me.  Many of us have lots more family, and we may have a lot of extended family that we can name, but may not see often.  And we can count in-laws, which double the numbers.  But overall, I think this seems in line with what I consider to be my “close family.”  If my prospects for marriage were as slim as those of us who have the label of disability, I would have around 8 family members in my life as well.  Since I’m married, I have twice as many.

In the next part of the graph, we see how many “Paid Human Service Professionals” are in the lives of the 51 people.  These would be people like group home support staff, staff from places like Starfire, day program staff, teachers and others who are paid to be in the lives of people with disabilities.

When I think of the people I pay to be in my life, I think of mechanics, carpenters, doctors, and the barber.  You could also think of hairdressers, landscapers, lawyers, accountants and bus drivers.  I have those kinds of people in my life, just as people with disabilities do. 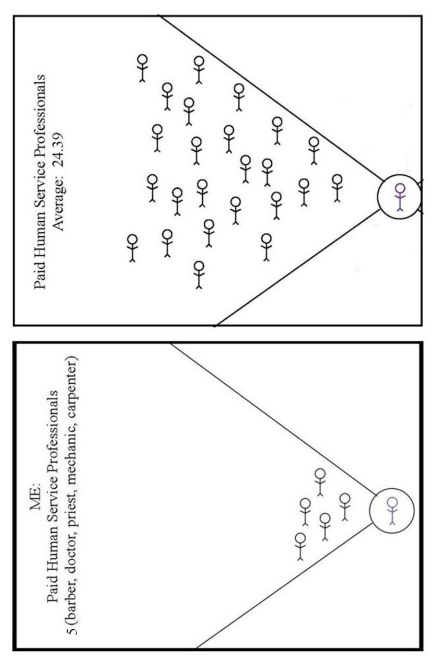 …there’s waaayyyyy more of them.

Kathy Wenning has helped me really understand the difference, though, between the people paid to be in my life, and the people paid to be in her son Joe’s life.  In my life, I have power over these people.  I can fire them if they don’t do a good job.  In Joe’s life, these people have power over him.  They build the programs, they make all the decisions, they fill the calendars and hold the purse strings.  They may say that Joe gets to choose, but in most cases, Joe is simply choosing from a menu that they have created for him.

I also get to pick who these people are…I hire them.  I decide if I want to pay a lot for quality, or if I want to go for the cheap option.  But Joe has these people hired by managers for him.  The quality of their training, attitude and the level of care is completely random, depending on the staff, their supervisor, and the agency.  Joe also can’t choose whether his favorite staff decides to take another job or gets promoted out of his life.

In my life, these people also play a very small role.  I may interact with them anywhere from one to four times per year.  Even if I had a therapist that I saw once per week, it would only be for an hour, and it would be limited to a set number of sessions.  So if they were promoted or moved away, it wouldn’t be a big loss to me.

For Joe, these people are a big part of his life.  When he moves out of his parents’ home, he’ll probably be in contact with a paid person every day for the majority of his waking hours.

So we may have paid people in our lives, but those of us with the label of disability have a lot more of them.  And if we have a disability, chances are the paid people exert more control in our life.  Big differences, huh?

The 51 people reported having an average of 2.41 friends without disabilities, and 2.75 “other citizens.”  We can assume that these “other citizens” might be neighbors or people from church, perhaps.

This is where my life and the lives of these 51 people starts to really look different.  I have over 700 ”friends” on Facebook.  I would say that about 50 of them are actively involved in my life.  In addition, I have another 50  or so “other citizens” in my life:  co-workers, neighbors, people who go to my church.  Many of them are potential friends in waiting, right?  So for me (and most people without disabilities), this part of the graph is filled….packed!…with people!

There’s a stark contrast between those images, huh?

The final quadrant is also important.  It shows the results of a system that serves people with disabilities throughout their lives.  They go to separate classrooms and even separate schools.  They participate in Starfire outings and Special Olympics with other people with labels like theirs.  They work in workshops and enclaves with each other, and they live in group homes together: 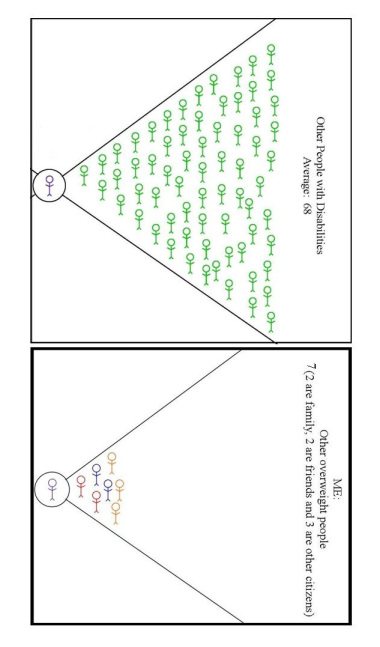 We can personally think of this section of the graph in two ways:  Do we have any friends with disabilities in our lives?

In my graph, I chose to count five close friends that have the label of disability and put them in the “friends” section.  They have spent time at my house, and me theirs.  Our families know each other and we see each other in many different places and on some holidays.

Most people without disabilities do not have actual friends with disabilities (If they did, we wouldn’t be having this discussion!)  They may know someone from high school, or they may volunteer at Starfire or some other place, but they don’t call them up on a Friday night, or meet up for coffee.

There’s another way to look at this part of the graph.  We can also think of it in terms of the segregation that is evident in the picture:  We can ask how many friends we have who share our negatively perceived labels.

Most people also do not get forced to work with, live with, hang out with, and go to school with people who share their same problems, limitations or insecurities.  I chose to chart the number of people in my life who were, like myself, overweight.  Notice that those people are my family members, my friends and my “other citizens.”

What if we said that everyone who got speeding tickets could only hang out together?  Or what if everyone who takes Viagra had to live in the same house?  (OK, that would be really weird!)

Side by side, these graphs make it pretty clear what is happening to people with labels of disability:  they are leading an unnaturally segregated and unbalanced life: 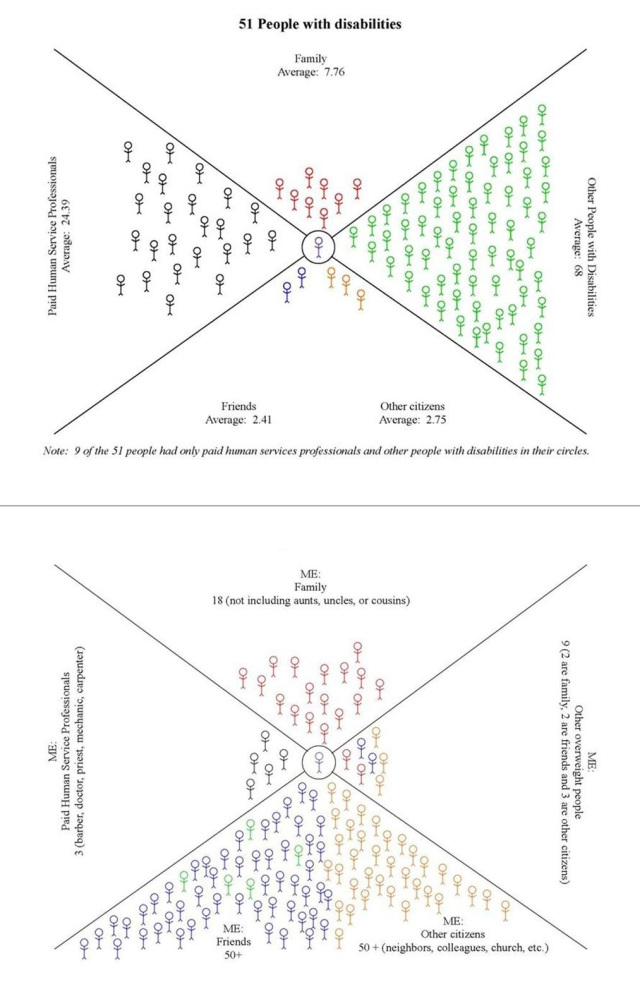 Take a look at the bottom of the “51 People” graph.  There’s a note that reads “9 of the 51 people had only paid human service professionals and other people with disabilities in their circles.”

This is why this is so very important.

If they have crappy and/or overworked staff, they are at their mercy.  If they want to do something with their lives that the paid staff don’t know about or don’t want to do, they’re pretty much out of luck.  If a terrific staff moves on, who knows who might take their place.  They don’t get to experience the respect of being loved for who they are.  Their chance to live a good life is pretty slim.

Remember how we had these two questions at the start?

Well, we’ve answered the first definitively:  No, this does not look like my life or most other people’s lives who do not carry the label of disability.

And the tragedy is that in conversations with parents of people with disabilities, when I ask that second question today in 2012, they become quiet, shake their heads and say something like “Nothing has changed.  This is exactly what my son’s/daughter’s life looks like.”

And remember my friend’s insightful and challenging question about the article:

“What are you going to do about changing this reality?”

I said the challenge was beautifully simple and sadly pathetic:  Be a friend to someone with a label of disability.  Do what friends do…hang out, call each other, worry about each other, make a fuss over each other on birthdays, joke with each other, introduce each other to new friends. 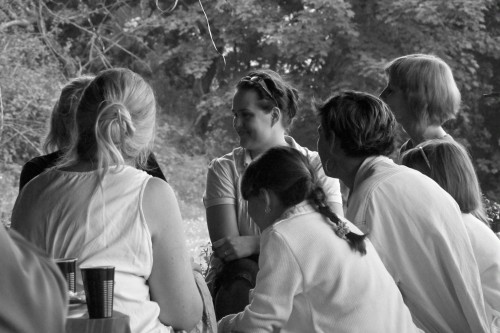 Simple, huh?  So…..what will you do about this reality?

Feel free to offer up questions, thoughts or objections in the comments section if this is unsettling or confusing.  I can try to answer them in later posts.